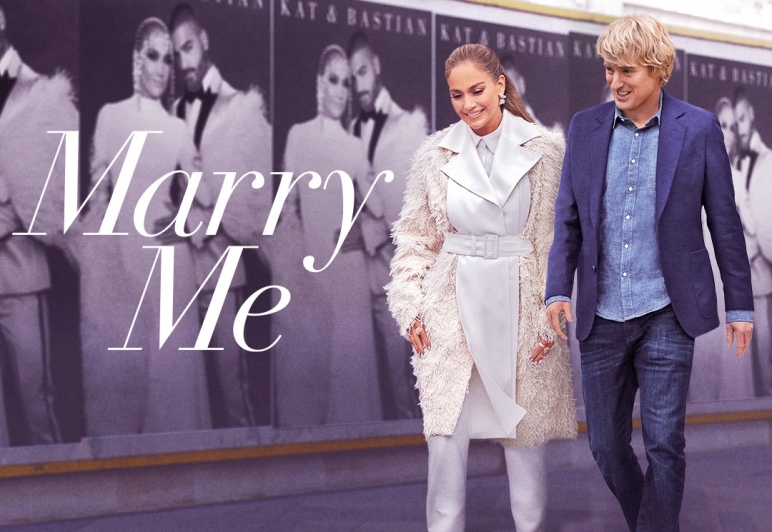 In honor of Valentine’s Day, here are my thoughts on the new Jennifer Lopez vehicle, Marry Me. It doesn’t require more than one viewing (of the trailer) to analyze, but it’s endearing nonetheless.

Summary: Kat Valdez (Jennifer Lopez) is set to marry fellow pop star Bastion (Maluma) during a concert at Madison Square Garden. As that implodes mid-show, she marries a stranger (Owen Wilson) from the audience. They spend the next six months getting to know each other, exploring what life is like “on the other side of the tracks”. His daughter and colleague bond with her assistants and manager, and the whole crew just has fun in New York. There are all the typical rom-com beats, and it’s just a simple, feel-good movie

Jennifer Lopez plays herself as Kat Valdez, a “global superstar”. From red carpets to brand deals, all the tropes are played out. Lopez is known for rom-coms such as The Wedding Planner, Monster-In-Law, and Maid in Manhattan, but she has only once before played a pop star, in a biopic of Selena Quintanilla. This role seems more personal to her, and she embodies the character well.

Owen Wilson plays math teacher and single father Charlie Gilbert. “Math teacher” and “single father” comprise his entire onscreen personality- an endearing cardboard cutout of a character. Wilson can actually act (Loki, Midnight in Paris, Wonder), but here his smile and encouraging one-liners are enough. The mother of his daughter is briefly referenced but never seen, leaving him conveniently available to marry Kat on a complete whim.

Let me be clear; Owen and Jen have very little chemistry. But they don’t need to have chemistry, that’s the point of their arc. It’s a slow burn. They come from such opposite worlds, but their empathy and gradual understanding is adorable. Critics lambast the implausibility of the connection, and to that I suggest they watch a documentary. 🙂 One particular phone call highlights the literal ocean between these characters and the common ground they can still share.

Maluma plays Bastion, another pop star playing themself in this film. If Maluma was cast as a lead in any other movie he would likely flounder, but here all he has to do is be cute and sing. He doesn’t have much of a character arc, remaining a static playboy from the first frame to the last, but the film is good awareness for his personal brand.

The side characters also add a lot to the movie. Charlie’s 12-year old daughter Lou (Chloe Colman) adds comic relief and her idolization of Kat is familiar to any former (and current) fan girls. Charlie’s coworker Darcy (Sarah Silverman) steals the show, capitalizing on the insanity of the situation and helping Charlie embrace the fun of it. Kat’s manager Colin (John Bradley) serves as a foil to Darcy, attempting to keep this crazy train at least next to the tracks. 🙂

The size and speed of celebrity life is immersive in this film. With “the hit song” playing on everyone’s ringtone and Jimmy Fallon making quips hours after the wedding, Kat is everywhere – whether she wants to be or not. This is where the “fishbowl” feeling can get overwhelming, for Kat and viewers alike.

The movie also incorporates social media in interesting ways – showing when pivotal scenes are live on Instagram, including clips from news shows, and generally highlighting the pace and volume of information today. This is the first movie I’ve seen where social media tells as much of the story as characters do. Some movies show characters “going viral” for a moment, but the ongoing presence of extra screens adds a “Big Brother” feeling. Something else that I noticed was the sheer volume of product placement. Yes Kat does celebrity endorsements, as they all do, but even outside of the celebrity world there were clear pitches for Vitamix blenders and Samsung phones and Google computers.

Pacing: It’s a romantic comedy, it follows the standard formula. The meet-cute is more bizarre than cute, but the movie doesn’t waste time in the prologue. While some rom-cons can hold on to realism until the third act, this one asks us to suspend all disbelief instantly, but it is absolutely worth it.

Overall, I would recommend this movie more for a girls night than a date night. It’s good escapism, and it doesn’t take too many brain cells to watch. Find this one on an airplane, or on TV when you are fried. 8/10 for good music, adorable leads, and entertaining side characters. Two points lost for pacing and heavy-handed product placement. Enjoy it for what it is and download the soundtrack.