On Monday the 7th we toured some important sites relating to the Battle of the Somme in World War One, and it felt like going through all five stages of grief in one day. It was absolutely heartbreaking and maddening and confusing, but it was also an incredible privilege to walk through history and understand the true cost of war and how this region has processed the trauma, particularly in contrast to Belfast.

Our first stop was Devonshire Cemetery, where our tour guide informed us that some of the youngest casualties of the Somme were boys as young as 12. Twelve. I have cousin who are twelve years old and I am appalled at the thought of them anywhere near a battlefield. Many of the recruiting officers were so desperate for troops that they turned a blind eye to thousands of underage enlisters. I believe that World War One was an industry and men were products in the eyes of many generals and military strategists. Whoever moved the most human units and had the lowest loss statement was the victor.

Four thousand men lost their lives between the spot where I stood and the edge of the wood. Four thousand men died in the space of a few yards, under the orders of one greedy general. This haunting stretch of land is just opposite the red dragon that guards the Welsh memorial of Mametz. 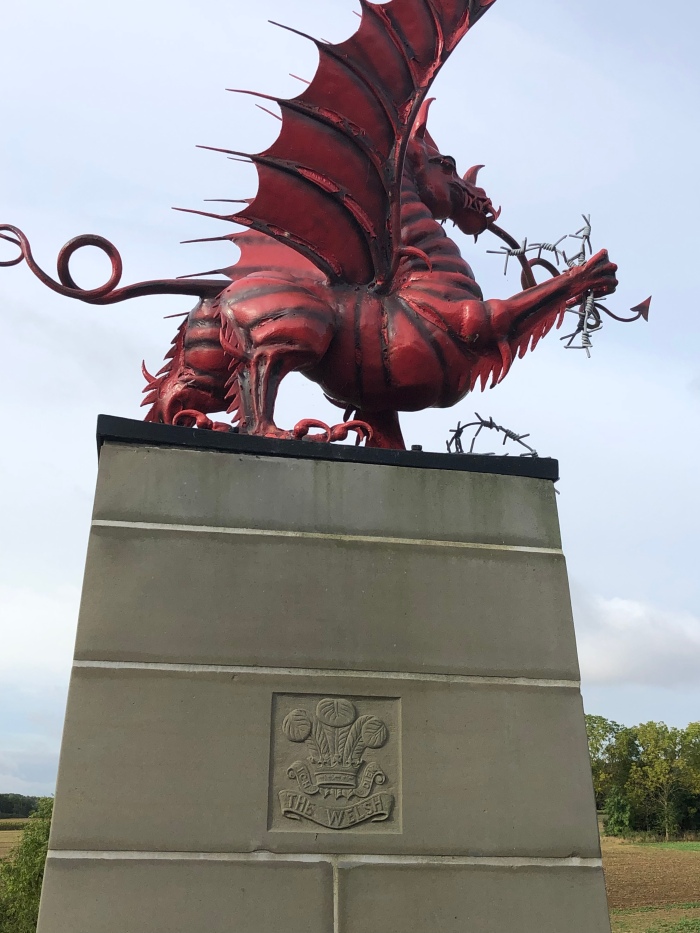 While we marveled at the Lochnagmore Memorial Crater, left to memorialize an exploded mine, we were visited by this friendly little pup. He seemed a little skittish and didn’t want to be pet, but he sat and listened to our lecture for a while. Having him around was a nice way to lighten the mood in the middle of the tragic history.

This sculpture, simply titled “The Empty Chair”, rests at the Lochnagar left after a mine explosion and symbolizes the place left around dinner tables and fireplaces by the 37 million total lives lost in World War One. Seeing this chair was a powerful supplement to the names on the Thiepval Memorial of the Missing. 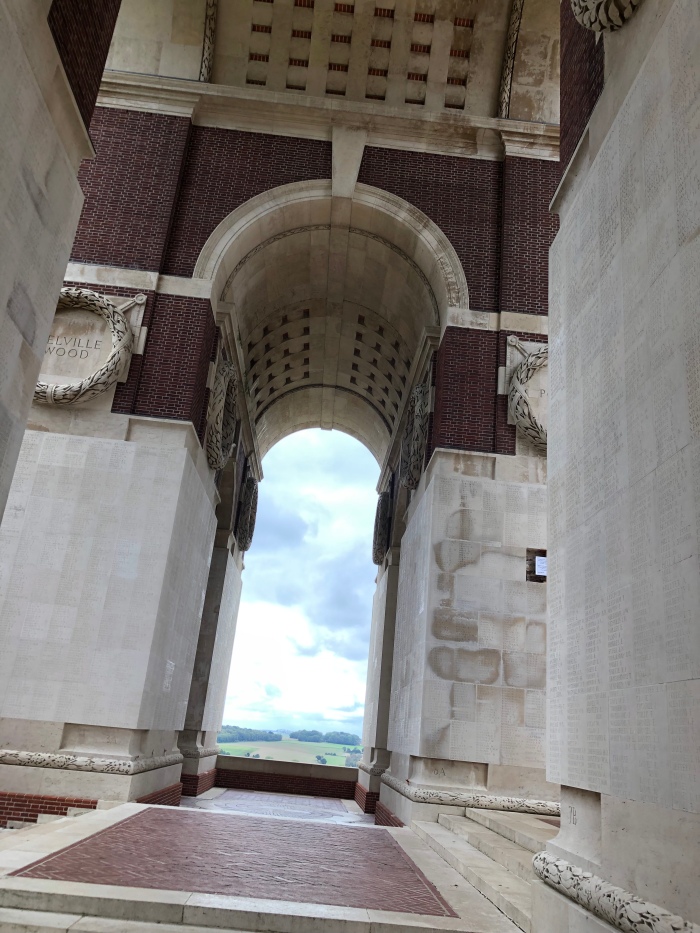 Theipval Memorial of the Missing was a hard site to walk through and a terrible sight to see. All the names on the pillar add up to 72,000 men whose bodies were never found to be buried. There were actually 1000 more men, but they have been found and buried. 72,000 men, who had families and passions and hobbies and favorite foods. And they died on a hellish battlefield without so much as a proper burial. Our tour guide told us that four bodies were found and buried in the last year, and explained the archeological process of identification and burial. This process makes me wonder, at what point does history become history? At what point is it a logical matter of preserving data instead of a somber funeral for a life lost unfairly?

This was our final site of the day and it was a fitting note to end on. We ended at a preserved battlefield at Newfoundland Memorial Park. The catch is that they removed all evidence of battle for security reasons and decided not to alter the land in any way. The result is that nature has proven that beauty triumphs over violence. The grass has grown in, and the trenches have naturally filled in so that craters are now small valleys in a miniature mountain range.

This overgrown valley is a perfect visual of the internal processing that the people of France have undergone, and serves as a stark contrast to Belfast. While Belfast was a town still very much in the throes of conflict, northern France has made peace with the world, despite frequent reminders of the horrors. They have the distance of 100 years while Belfast has less than 20. The people of northern France have been able to honor their dead and carry on quiet lives and I admire that, and hope that Belfast can reach that point of healing.

Monday was a very intense day and I had a hard time handling the heavy grief. It was also an incredible once-in-a-lifetime experience. I don’t tend to dwell on heavy topics, simply because I’m not wired that way. The tour was a way for me to stretch my emotional boundaries and pay my respects by absorbing the vital knowledge. Knowing how France has housed these traumas has also reminded me that humans are resilient and able to find beauty and peace again.

3 thoughts on “Albert-Scars of War”