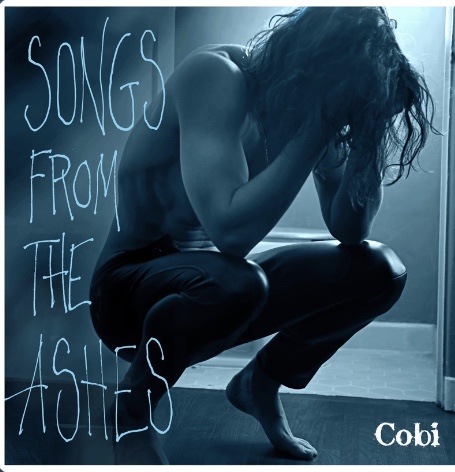 Cobi is continually climbing. Three years after his second EP, Songs From the Ashes pt 2, he has released his debut EP. While the two EPs (Songs from the Ashes pt 1 and 2 respectively) were released a while back, the album completes the thematic story.

Cobi is best known for his gut-wrenching single Don’t You Cry for Me, which landed him on Jimmy Fallon’s show. While the single deserved all its praise and more, Cobi has a bigger story to tell. He released his LP from his home studio, on Manitou River Records (named for a river in his home state of MN). The EPs were produced in 2017, with heavy drums influenced by well-known producers. It’s a far cry from a home studio and song demos on a laptop, but Cobi enjoys the creative control. He’s built a loyal community with weekly YouTube live streams and frequent single releases. “It makes sense to release singles waterfalling into an album [instead of] in a bubble, creating an album that nobody hears until it’s complete”. Cobi’s creative process is similar – playing with music and then adding lyrics as they come “I can just listen to it. It tells me what it wants… the music just writes itself that way.”

This easygoing, communal way of sharing music has proved fruitful, and we can’t wait to see where Cobi goes next. Without further ado, here are my thoughts on Songs From the Ashes.

Fools Gold: Sonically this is great, with sweeping guitar and synth, and multiple arcs and crescendos. This, among many of Cobi’s songs, would do well as a movie score or soundtrack. But- the lyrics scream that the singer needs therapy. Being afraid of love is a sad way to live, but it’s a good place to start this journey of evolution.

Queen of the Damned: This sultry upbeat song is a clear highlight of the record. The subversion of religious imagery is enhanced by La Doña’s feature verse, almost entirely in Spanish. The addition of horns adds a cool twist, and this is a great song to dance to, especially with your partner in crime 🙂

You’re Mine: This one isn’t one of my favorites, I gotta be honest. The melody is a good headbanger, but the lyrics come off possessive and toxic. The song could be viewed as a critique of classic “please come back” tropes, but I prefer the softer, more introspective songs on the album.

Everything You Need: With jazz-like piano and finger snaps, the melody is incongruous with the deep insecurity of the lyrics. In an opposite but still toxic angle, the lover pushes the singer away and he grapples with his own worth. It’s still a sad place to be, but his eyes start to open.

Skin Deep: This track feels almost out of place in the middle of all the angst, but it’s a lovely soothing little song. It’s about returning to love the same soul in different forms. It’s a little mystical, which is definitely my style. The sound is “dream-like”, with

Eavesdropping: This track and the previous are tied for my favorite for opposite reasons. While “Skin Deep” has a soothing, romantic vibe, Eavesdropping is harsher in sound and lyrics. Cobi is singing from the perspective of a jilted lover who’s jealous of Cobi, and the third-person meta-narrative is a cool angle. The staccato rhythm is easy to dance to and the lyrics are catchy as hell too.

Better Days: Although the dreamy synth is similar to Skin Deep, the song is far sadder. The sensory details of happy summer memories only highlight the gap between a loving past and a lonely present. It’s a sad song, but very well written.

Shadows: Cobi’s bittersweet musings are relatable to anyone who wrestles with inner demons – so. basically everyone. The sweet refrain “If I have a demon, I must have an angel” shows some hope, a light in the wilderness of our own beings. The soft guitar and synth add to the reflective tone, and it’s a good song for pouring a drink and facing yourself in the mirror.

She’s an Artist: I can’t name the main instrument, possibly a higher synth, but this song isn’t shy with the sultriness. I won’t get into detail, but it’s a good song to play for date night 😉 The driving drum and synth definitely lend themselves to some dirty dancing,

Operator: I’ll be honest, I never quite got this one. It’s reminiscent of Billie Jean, with the fraught relationship and paternity issues. The melody even reminds me of MJ’s hit, with a similar drum beat. It’s a fresh take on a classic theme, it’s just not my personal jam.

Pour One For Me: The soft guitar begins the last chapter of the album, bidding farewell to the rollercoasters of love and wishing them well. With just a simple guitar melody, the stripped production allows Cobi’s voice and emotions to shine through. I’ve made a few goodbye toasts, and this is a fitting send-off for anyone ready to close a chapter

A Long Time Ago: This is a beautiful, soft confessional, admitting and releasing past sins without naming them. The strings and gentle drum make this almost a lullaby. Listeners get the sense that Cobi releases a former friend/lover and his past self. The music video incorporates the rugged beauty of California and deftly shows the parallels of internal and external wilderness. This has become one of my favorites of the album.

Keep Climbing: As the grand journey of self-discovery wraps up, this song is a great anthem. With a solid drumbeat and synth accents, the upward sonic momentum and inspiring lyrics make this a highlight. Cobi bas reached the Zen of self-acceptance here, with dreamlike advice from loved ones and

Hard Feelings: With Cobi’s classic synth and drum mix, he wrestles with lingering love and memories that “paint the town in my mind.”

Highs and Lows: The guitar of this song is reminiscent of John Mayer, and the lyrics are a mystical reflection on the whole album. With family and societal references, the song urges listeners to carry on in the face of trouble and “find love high and low.” I wouldn’t call it a favorite, but I respect the imagery and Cobi’s vocal range

This album has been a long time coming, and Cobi’s already gearing up to release another one this year! For now, stream his new single Pressure, out 3/4.