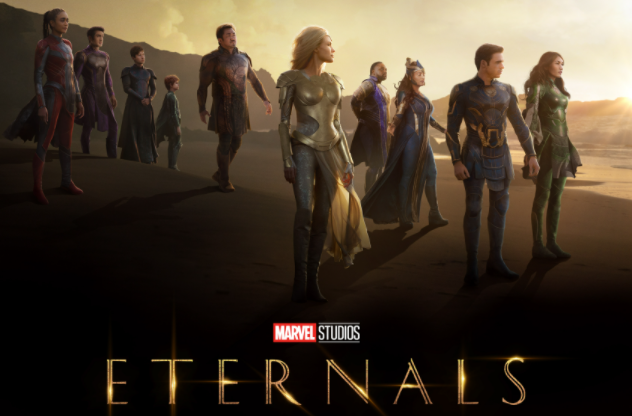 Marvel’s latest blockbuster is another effort at “breaking new ground”. In many ways it does, with Marvel’s first deaf superhero Makari, the first openly gay character Phastos, and the first on-screen sex scene (short and tame, but still interesting). All of these are good things to finally show on a Marvel screen. The problem is that the “new diversity quota” of the film overshadows character development and plot cohesion. A secondary problem is that the grand scope of the film needs a “part 2” to be complete, much like Infinity War.

There are ten Eternals, so this will be a long section

Sersi and Ikaris need some counseling. As the film’s primary leads, their chemistry and tension take center stage, overshadowing their individual motivations. Ikaris is a follower, a soldier. He serves his leader without question and puts nothing and no one before his mission. Sersi is a mother, despite not having natural children. Her warm and caring instinct for humanity drives her to disobey orders and reclaim her own voice and purpose.

Makkari and Druig provide some sweet balance to the drama of Sersi and Ikaris. Their flirty banter, and Makkari’s fierce protection of Durig, are a lot easier to root for than a central couple who haven’t been together in a century.

Thena and Gilgamesh need hugs. Angelina Jolie’s role as the warrior goddess is a moving portrayal of a self-acceptance journey. Her struggle with a “mental illness” and Gil’s role as caretaker are heartwarming, if a tad melodramatic.

Phastos and Kingo have made their peace with Earth, and they contrast each other niceky. Kingo has found his purpose as a Bollywood star, “part of the greatst acting dynasty of Bollywood”, but his security is shallow. In contrast, Phastos has found a smaller, deeper security with his husband and son. Phasstos’ journey of harnessing his technological powers and using them for good is reminiscent of Tony Stark, but Phastos checks his ego at the door.

Sprite and Ajak move the plot forward, but Sprite has the more interesting arc of the two. As an immortal with a 15-year-old appearance, Sprite yearns for a true human experience. Her longing and curiosity are moving, and her eventual victory is heartwarming, but her pining for Ikaris feels forced and uncalled for. Salma Hayek has a regal quality as Prime Eternal Ajak, but she realizes the consequences of her misdirection too late, and ultimately has little impact on the plot or the other characters.

Bonus: Eros, the brother of Thanos, needs his own movie. Despite having less than five minutes of screen time, he had more charisma than half the cast. This is mostly because Eros is played by Harry Styles of One Direction fame. Styles has signed a five-movie contract with Marvel, so we will certainly see more of him soon.

Since the scope of thia movie is the entire globe over 7000. years, the options for visuals are endless. One interesting thing is the costume choices, with half the team in warm tones and the other half in cool tones. The emotional and narrative significance of the costumes is subtle but enriches the story. The first shot sets up the film as a grand epic, with scrolling text reminiscent of Star Wars. While I don’t personally like movies that rely on this, I can see how it establishes genre and scope. The film uses onscreen text well overall, including subtitles for sign language, other languages, and the year and location of each new era.

The movie is a cosmic battle between ideologies. The tension between Eternals who want to follow Arishem and Eternals who want to save humantiy is what drives the movie. Putting Sersi and Ikaris on opposite sites of this debate detracts from their romantic chemistry, but it highlights who they are individually. Phastos and Druig have the most visceral reactions to their true origin, but all of the characters encourage viewers to wonder how we would react.

The grand nature of the story allows for a birds-eye view of human history, but the Eternals have gaps in their individual stories that aren’t clearly explained. The time between Ikaris and Sersi’s split and their reunion is entirely ignored, and the roots of their problematic relationship are never really addressed or resolved.

Overall the film is a grand epic, and a decent setup to the next phase of the MCU. It wasn’t my favorite, but it was nice to go deep on some new characters, and I’m intrigued to see where this branch of the MCU goes from here. I give it 8/10 stars for a strong aesthetic and good characters with good chemistry. Two points lost for the overreaching, and the gaps in the plot. I would recommend this to die-hard Marvel fans, but not first-time viewers.