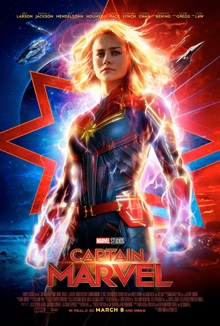 Hello! This review has been a long time coming. I first saw the movie on Tuesday and I went again last night with my mother and now I can organize my thoughts. The movie was released on International Women’s Day, which is definitely not a coincidence, but also may escape the attention of less observant viewers. There are enough details in this post to merit a spoiler warning, so proceed with caution. Now let’s get into it.

Right off the bat, instead of the usual clips of heroes forming the Marvel movie logo, all the clips were of Stan Lee. After the logo finished, “Thank You Stan” cane up in white text on black screen. A fitting tribute to the patron saint of superheroes. A tiny bit later in the movie, I noticed Stan’s cameo and realized that it may well have been his last. ❤️

I didn’t notice this until a couple hours after the first viewing, but Carol Danvers never really gets a love interest. Initially she has a flirtation with Jude Law’s character, but that goes south about halfway through the movie. She and Nick Fury keep up an entertaining banter but never venture into emotional territory. The movie doesn’t suffer from a lack of romance, rather the lack of forced romance allows us (and Carol) to focus on her journey of identity and self-discovery.

One of two fabulous supporting characters is Carol’s best friend Maria Rambeau. She is an African-American female Air Force pilot, as well as a single mother. In addition to all of this, she deals with the sudden reappearance of Carol after six years. This is a lot to throw at a character, but actress Lashana Lynch handles the role with gravitas and wonder. Her daughter Monica is also a lovely character, full of wit and charm and pure childlike amazement.

Another standout actor is Ben Mendelsohn as Skrull general Talos. The entire plot arc of the Skrulls is complex-they start off as the straightforward villains and then end up as sympathetic characters. This change may seem abrupt, but Mendelsohn deftly handles the transition, and gives a moving performance.

Without giving up too much of the plot, I will say this: anyone who thinks Nick Fury lost his eye in a tragic, heroic battle is wrong. He lost his eye because an alien cat scratched it. Yes, that is the great mystery. 😂 In general, this movie lets Nick Fury be the happiest and most human we’ve ever seen him. He is clearly out of his league with the intergalactic elements of the movie, but it’s endearing to watch him learn how to navigate this new reality and banter with the space warriors. In addition, Phil Coulson finally returns to the MCU after seven years-this time as a young green SHIELD agent who’s also out of his league. These two beloved MCU staples add a warm nostalgic air to the movie.

The return of the beloved characters adds nostalgia, but so does the plethora of music from the 1990s. From No Doubt to TLC to Dave Matthews Band, everything is covered, and viewers over about 25 will appreciate the trip down memory lane.

Primarily the movie is an ode to the military, in many forms. We first meet Carol as a soldier in the alien Kree army (where she battles nightmares and likely other PTSD). We see that she’s good at her job; but follows her gut more than her head. Her past reveals her heroism, her commitment to the US Army, and some nasty misogynistic soldiers. But her act of bravery that landed her on the Kree planet is what defines her as a hero-not her Kree training or how well she can repress her emotions, but how well she can trust and follow them. This is a valuable lesson we can all practice.

I was not aware of this beforehand, but the colors of Carol’s uniform are actually the colors of the American Air Force logo. I only know this because the movie uses a pivotal scene to explicitly state this similarity. I initially thought her logo was meant to be an homage to Wonder Woman, and perhaps it is, but there is also the national pride.

Captain Marvel has a unique relationship to the rest of the MCU. In regards to character personality, Captain Marvel is like a female Captain America minus the self-loathing. Both have identity crises tied to time, both are patriotic via the military, and both can kick everyone’s ass. The difference is Carol has wit where Steve just has sheer pain. As pissed as I am that we don’t have a Black Widow movie, I can see how this one takes precedence. Marvel introduced Black Widow almost 10 years ago and they haven’t changed her at all, and then we get this new hero, introduced in the #MeToo era, and there’s a sharp contrast in character depth and relatability.

Overall, I give Captain Marvel about 8.5/10 for entertaining and progressive protagonist, interesting questions on identity and morality, and some standout supporting characters. Points docked for a somewhat confusing and bloated plot, and the character shifts were a bit abrupt.