This cheesy 80s-inspired movie burst onto Netflix about a month ago and some friends from my dorm showed it to me. I immediately fell in love with the lead male, but the rest of the show is thin.

The movie centers on Lara Jean Covey, outwardly a stereotypical shy Asian girl, but with lots of *intrigue* (confusion and desire) beneath the surface. She gets into trouble when her smartass sister leaks her private love letters to five crushes. She ends up getting in a *fake* relationship with Peter Kavinsky, who looks like a Greek god, and that’s literally the only info that matters. 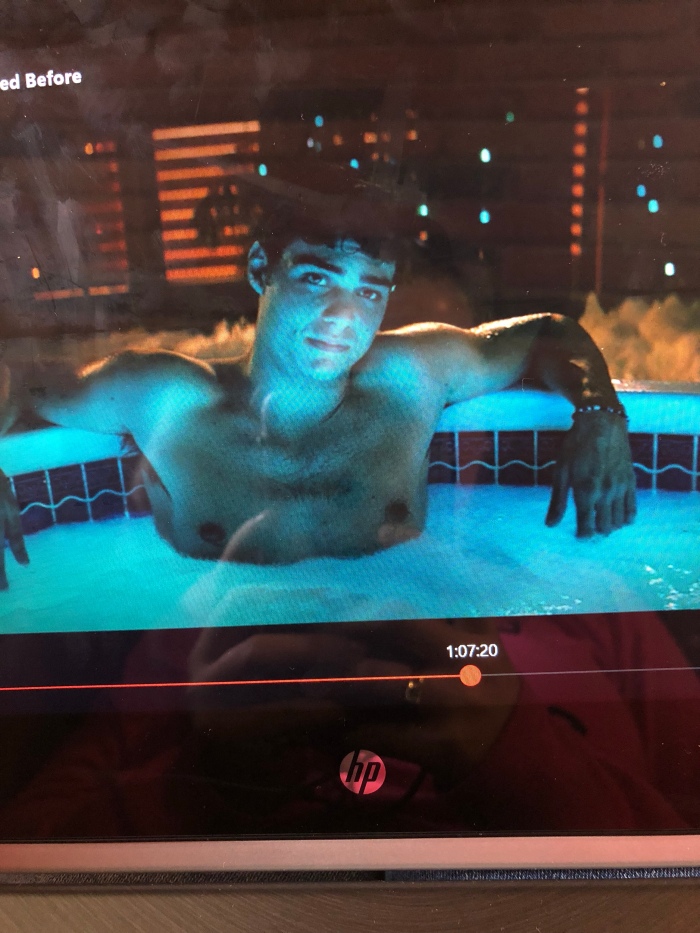 Am I wrong? Who wouldn’t jump in?

Enough fangirling let’s get to actually reviewing: Lara Jean herself is about as interesting as carpet. She’s slightly better than Bella Swan, but that bar is on the floor. (No, jealousy is not making me biased, what makes you think that? 😊). She puts up an innocent front that hides the most confused mind I’ve ever seen in a teenage character. While I can relate to confusion, she’d be more interesting if she made up her own mind instead of letting the boys around her dictate what she does.

There are a few interesting side characters: Lara’s BFF Chris, her aforementioned witty sister, and her dad, played by the always awesome John Corbett. There’s a few token mean girls, but no one is that interesting.

Ok as much as I love Peter, he is problematic. He goes ahead with the fake relationship before Lara has agreed, he continues to be obsessed with his ex, and he’s known as the school “popular jerk”. Worst of all, he lets people think he cheated on Lara in a big way, after letting a revealing video get online. While he’s charming and I’m a sucker for a sad family background, charm and pain can’t excuse being an asshole.