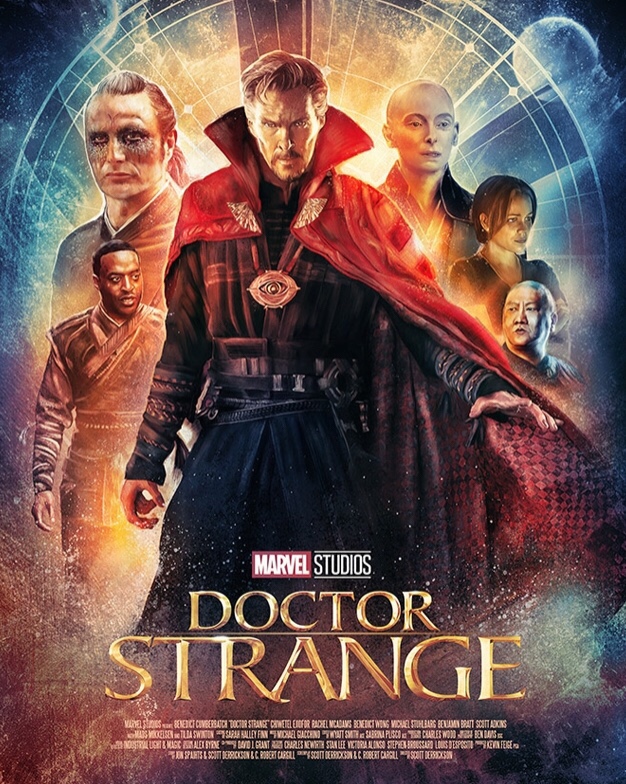 Welcome back! You may be wondering why I’m reviewing a movie that’s six months old by now. With the impending release of Avengers: Infinity War, this post kicks off Marvel Month! This installment of the Marvel Plan for World Domination tells the story of famed neurosurgeon Stephen Strange, his fall from glory after losing the use of his hands, and his ascendence to Sorcerer Supreme of an entirely different kind of science.

One of the standouts of this movie is the stunning visual effects used to capture the effects of magic. From rotating buildings to teleportation to astral projection, the world of magic is brought to life with breathtaking accuracy and beauty.

When it comes to Stephen himself, his arrogance is strangely charming. This may have something to do with the fact that he is already known for playing the deduction wizard on BBC’s Sherlock, but in any case Benedict Cumberbatch is the darling of fangirls of multiple genres. In addition, watching Strange’s utter humiliation and insanity lends a bit more humanity to a godlike character. Lying in the hospital bed after an 11-hour operation, his paramour Christine tells him “No one could’ve done better.” In typical Strange fashion he replies “I could’ve done better”. His commitment to saving lives and trying to escape his new reality is endearing, if somewhat futile.

I’ve said it a million times and I will say it a million more: Rachel McAdams is a wasted actress in this movie. Her role as Christine Palmer, the paramour-turned-martyr-turned-something else feels sloppily written and is entirely unnecessary. They could have given her more screen time, cut the role entirely, or let a lesser-known actress take the role.

One of the more useful and complex characters is The Ancient One, also called the first Sorcerer Supreme. Played by Tilda Swinton, this guru has more to her than meets the eye but has a benevolent heart for her students, if protecting them by unconventional methods. One could compare her to Loki in some ways, both mysterious and somewhat mischievous. As the Ancient One says, “we never lose our demons. We only learn to live above them”.

The philosophy of the Ancient One provides a nice contest to Mordo, Strange’s colleague and sparring partner. Mordo follows the black-and-white approach to good and evil, and blindly trusts those he calls “good”. The shattering of Mordo’s world sets him up to be an excellent villain in future films. Unfortunately, this film has a laughably flat villain with zero personality or purpose other than engaging in excellently choreographed fights.

I confess I started watching this one evening and paused it halfway through when I realized I had reached the end of the actual plot. The second half of the film has a few surprisingly poignant scenes, but mainly the “grand finale fight” of every action movie. The time manipulation adds an interesting aspect, but overall it’s nothing totally different than any other Marvel movie.

Overall I give this movie 6/10 for stunning effects, a nice cast, and a decent setup for future movies. Points deducted for rambling plot and some useless characters. I would say this movie is not for viewers under age 15 due to some fictitious dark magic and slight gore, but Marvel fans and those interested in “mystic arts” will appreciate the film

One thought on “Dr. Strange”